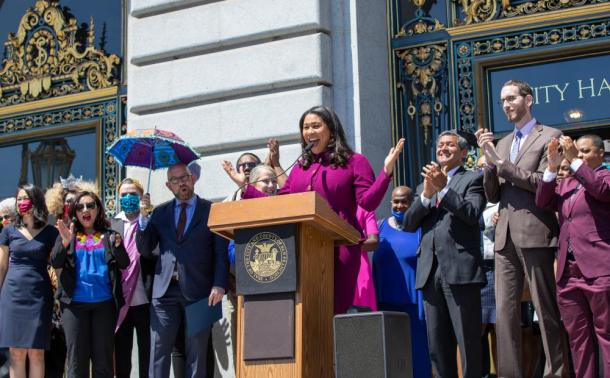 San Francisco Mayor London Breed is taking a victory lap after the elections on Tuesday. Breed wasn’t on the ballot, but multiple candidates she appointed to office were. All of them are ahead as of Thursday morning.

Three school board candidates appointed by Breed after the February recall are poised to keep their seats, according to the latest election results.

Six challengers were vying for the three seats vacated after the recall:

Leading contenders Weissman-Ward, Motamedi, and Hsu were all appointed by Breed. López was one of the members recalled in February.

San Francisco District Attorney Brooke Jenkins is also in the lead for DA, though possibly headed for a runoff. Jenkins was appointed by Breed following the recall of progressive DA Chesa Boudin in June. Jenkins had resigned from the Office after Boudin’s election, citing his restorative justice policies. She then ran on a law-and-order platform.

In Board of Supervisors District 6, Matt Dorsey is leading Honey Mahogany with 55% of the vote. Dorsey, the political moderate in that race, was appointed by Breed following Matt Haney’s election to the California State Assembly.

The success of Breed’s appointees strengthens her position in the city. It may also demonstrate an appetite for political moderation in a place long known for its progressivism. In addition to the races mentioned above, moderate Democrat Joel Engardio is leading the progressive-backed incumbent Gordon Mar for Board of Supervisors District 4.